The primary driver of the global transformation of outdoor lighting  to LED is energy efficiency. But how do we define efficiency? There are cities that have chosen to use the most inefficient “decorative” fixtures like the Washington Globe or acorn simply because they like the way they look during the day. At night these fixtures spray light everywhere creating glare, uplight and light trespass reducing visibility instead of enhancing it. How is this efficient?

There are several metrics for measuring efficiency commonly used by manufacturers. The most common is the Luminaire Efficacy Ratio or LER. This is expressed in lumens per watt and defines how much light is radiated (lumens) from the fixture and is divided by the amount of energy consumed by the fixture. However LER includes lumens that never reach the desired target, i.e. the road or sidewalk. The LER rating is the only measurement most manufacturers publish and therefore what most consumers use to compare the energy efficiency or efficacy of the fixture .

While LED technology is now exceeding the LER of most older HID technology, LED has also been promoted for its ability to get more lumens out of the fixture and its ability to better control where they are directed. HID fixtures have to employ reflectors to redirect much of the light output onto the surface being lighted. The use of a reflector decreases the quantity of light reaching the task area. In addition, the lenses, or refractors used to evenly distribute the light over a wide area cannot overcome the tendency for the fixture to have a “hot spot” directly under the fixture where the illumination level is much greater than necessary for the task. This uneven distribution contributes to inefficiency and creates poor uniformity of illumination levels.

The best metric to compare the efficacy of light fixtures defines the target area and measures only the lumens that land in this area. There have been several specific metrics developed over the years to define this efficacy including Target Efficacy Rating (TER), Fitted Target Efficacy (FTE) and most recently Luminaire System Application Efficacy (LSAE). All these metrics are a huge step forward in accurately defining efficacy but unfortunately are almost completely absent in the discussion of real energy efficiency when cities choose new lighting fixtures.

One reason that these metrics are not used more is that they are application dependent and can’t be determined by the manufacture without knowing the specifics of the intended installation. However as most customers already ask manufacturers to provide lighting plans, the application efficiency could be easily provided. The primary reason these metrics are not being widely used is that the city staff making the decisions are not aware of them and/or don’t ask.

This allows cities to choose to install the most inefficient LED lighting fixtures and still boast how much more efficient they will be than the older HID fixtures. For instance, while a typical LED acorn decorative fixture will have a LER of 50-60 lumens per watt, 40-50% of the lumens fail to reach the target area. Contrast this to a well designed, low-glare LED fixture that will commonly deliver 80% or more of its lumens to the target area, making it twice as efficient with the same LER.

It’s time that planners become more concerned about real world energy efficiency instead of claiming to be “green” while using the worst possible lighting fixtures because they look “historical” or “period”. The fixtures that these modern decoratives mimic used candles or gas lamps, projecting less than a couple hundred lumens. Modern acorn fixtures produce 5,000 to 10,000 lumens or more and waste massive amounts of energy in the process of producing glare, uplight and light trespass. LED is a new technology that can reduce energy and CO2 and there are dozens of period decoratives that look good while efficiently delivering lumens to the task area. Continuing to use acorns is wasting precious resources, period. 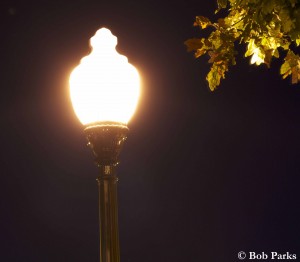 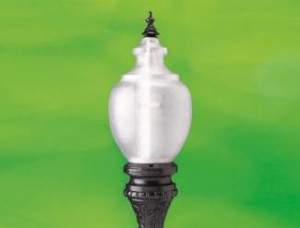 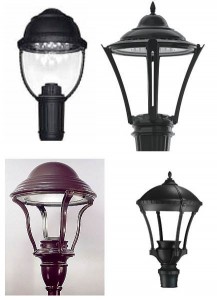