I’ve attended LightFair International (LFI) for about 10 years and this is the first time I can honestly say I’m cautiously optimistic. Why? Because some manufacturers are listening to the “opposition”. A little history is in order…

In 2010 I had recently become executive director at the International Dark-Sky Association (IDA), when the organization published a report on the negative effects of blue-rich white light on human health and the environment. It was the first major “disruption” that mobilized the lighting industry to circle the wagons and attack the messenger. Within a matter of months, corporate sponsors pulled their financial support from IDA and I received a decidedly frosty reception when visiting the booths of lighting manufacturers at LFI. We were officially persona non grata. Rather than use the report as an opportunity for introspection, many in the industry tried to repudiate and discredit the source. IDA had always been considered a “fringe element” that was suspect since it started preaching for fully-shielded fixtures in the 1980s.

The lighting industry has a long history of not welcoming advice from “outsiders”. When IDA began raising awareness of light pollution and its causes, it became seen primarily as a threat that had to be mitigated. But over time manufacturers responded to the perceived threat with better fixture design that gave customers the choice to use fully-shielded fixtures. Flash forward 30 years later and fully-shielded outdoor lighting fixtures now claim the majority of the market share.

In 2016, the American Medical Association (AMA) published a report on outdoor lighting that detailed its concerns related to blue-rich white light and history repeated itself. The industry again circled the wagons and responded by attacking the AMA, for the use of CCT as a metric for short wavelength spectral power distribution (SPD). This is a particularly laughable since CCT is the only metric the industry regularly uses to characterize blue content. Unfortunately, what was lost in the kneejerk reaction was the underlying core message of the AMA report: it was a wake up call to the industry to care more about lighting quality and to mitigate the negative impact of outdoor lighting on the environment and human health.

Walking around the floor of LFI without dark sunglasses is not recommended. Ironically a number of booths were giving them away as swag to lure attendees. This may be emblematic of the industry’s blatant lack of introspection, or maybe just its sense of humor. As LED fixture development has evolved, it has been able to pack more lumens on a chip and focus each one with laser-like precision onto the task. Unfortunately, if you make the mistake of looking at the fixture directly, those lumens end up being focused with the same laser-like precision on your eyeballs. Pinpoint sources that when measured exceed that of the surface of the sun. Does anyone out there actually think that this is a good thing?

The lack of real understanding of good public lighting design and the simplistic pursuit of energy efficiency goals is producing an urban landscape blighted by glare, light trespass, and skyglow like the world has never seen. Instead of harnessing LED’s superior control and adaptability to put the light only where needed, poorly trained and inexperienced DOT staff are launching an assault on the peaceful enjoyment by the public of their neighborhoods. The mantra of the city staff has traditionally been to put down the most amount of light for the least amount of money possible. Unfortunately LED technology allows them to “weaponize” this pursuit and do far more harm than ever before.

It’s time for the industry to look around and see what their products are actually doing to the nocturnal environment. While I’m not naive enough to expect them to start training cities to care about quality lighting design, I do expect them to offer the tools to achieve it. I’m glad to report that hope is on the horizon.

At the 2017 LFI, I saw lighting fixtures that show that some in the industry are beginning to develop fixtures that when used properly can bring better quality lighting to neighborhoods. Several standout developments must be recognized as game changers. First, the Cree RSW roadway fixture and its WaveMax ™ light guide technology opens a new chapter in better light distribution with less glare. It is also being shipped with 3000K CCT that has the same efficacy as 4000K, and is one of the first manufacturers to put 2700K and 3000K on the spec sheet without special order. 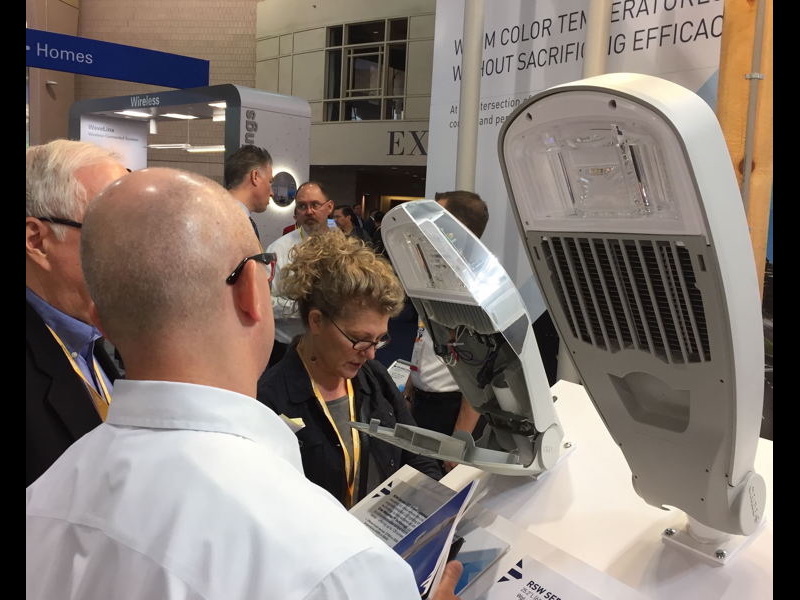 For these reasons, Smart Outdoor Lighting Alliance (SOLA) awards Best in Show to the Cree RSW. This should become the default roadway fixture for communities that demand visual comfort.

A runner up in the roadway fixture classification is the GE Evolve LED fixture. GE uses a reflector design to distribute the light more evenly and it does a pretty good job. It also is offering 3000K as a standard with efficacy that is about 9% less than the 4000K CCT.

The next encouraging development that I spotted was a widespread offering of pedestrian scale fixtures using diffused light sources. There was a range of post top fixtures on display from Acuity, Philips, Architectural Area Lighting, and Eaton. Not exhibiting at LFI, but also providing superior visual comfort, are fixtures from Sternberg and Kenall. Each had their own method of softening the glare, but I was most impressed with the direction that these fixtures demonstrate.

SOLA recently announced its Community Friendly Lighting (CFL) program to help cities choose the best lighting equipment and employ best lighting design practices to improve visibility and preserve neighborhood character and ambiance. We are delighted to announce that many of the companies mentioned above have applied to have their fixtures and controls certified for the CFL. Check the SOLA website for details on the CFL and a list of certified lighting equipment.