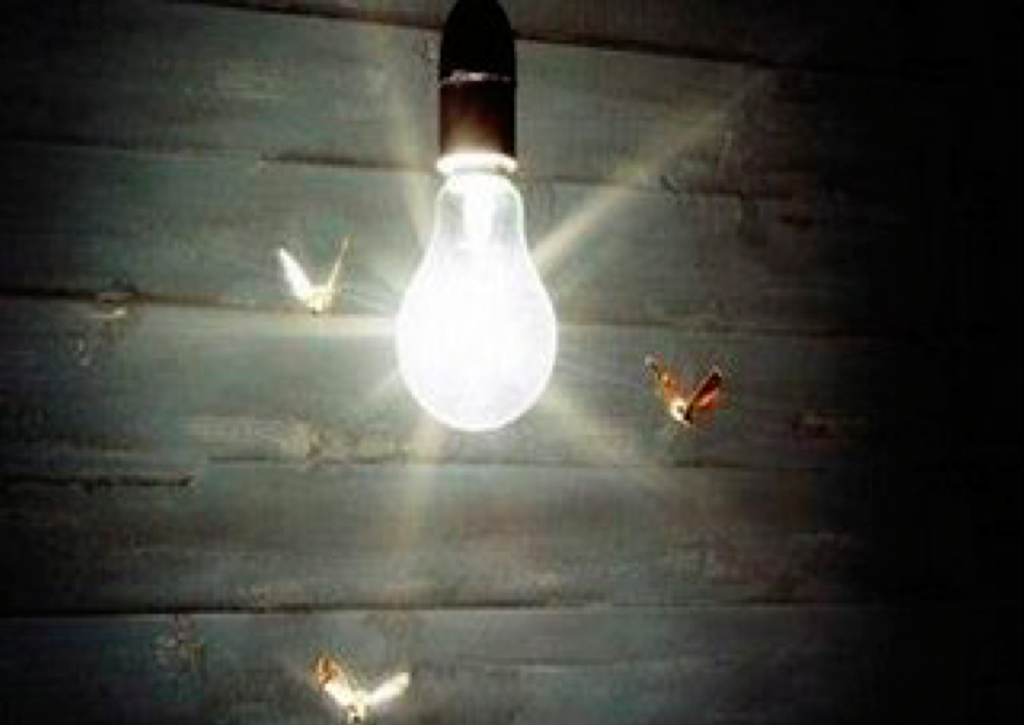 Ecologically responsible lighting design has emerged as a set of practices that, when followed, minimizes and mitigates some of the negative impacts of artificial light at night (LAN). The negative impact of LAN affects all species and the effects include circadian disruption, and the interruption of mating, foraging and migration patterns. Ecologically responsible lighting design requires that we use the minimum amount of light necessary, shielded and directed to the task area, and employing the most appropriate spectrum of light for the affected species. The first two goals are fairly obvious and have been advocated for years by groups concerned with the growing problem of light pollution. However, the third item is of equal concern when considering ecologically responsible lighting design. Most species have reduced visual response in the longer wavelengths of the spectrum. This means that red and amber light are not as visible and therefore do not tend to attract them to the light source.* Using lighting in this spectrum helps reduce the negative effects of LAN, but does not eliminate the impact.

I recently had the opportunity to test various amber LED light sources. While red light is arguably the best color for most ecologically sensitive lighting, it is so poor a light source for human visual acuity that an amber color is often used as a compromise.

True Amber LEDs have a very narrow bandwidth, similar to low-pressure sodium (LPS), and accordingly are often the best choice in ecologically sensitive areas. They tend to exhibit the least amount of attraction to insects and other species. Nevertheless, they have several drawbacks; visibility and color rendering index (CRI) are very limited and their efficacy is low at around 30 lumens per watt. They also can experience significant thermal instability, with their light output diminishing over time as they heat up. For this reason, they have not achieved significant market penetration, with the predominant usage in turtle safe lighting. 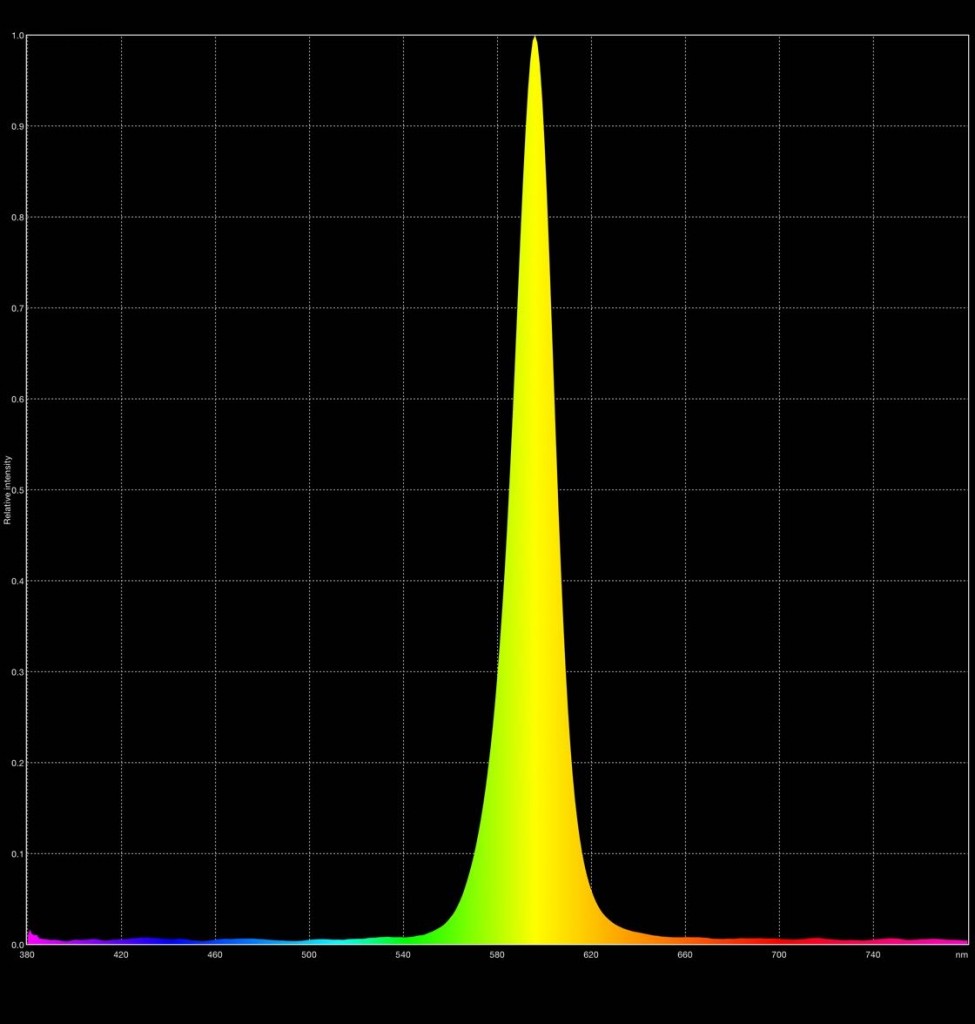 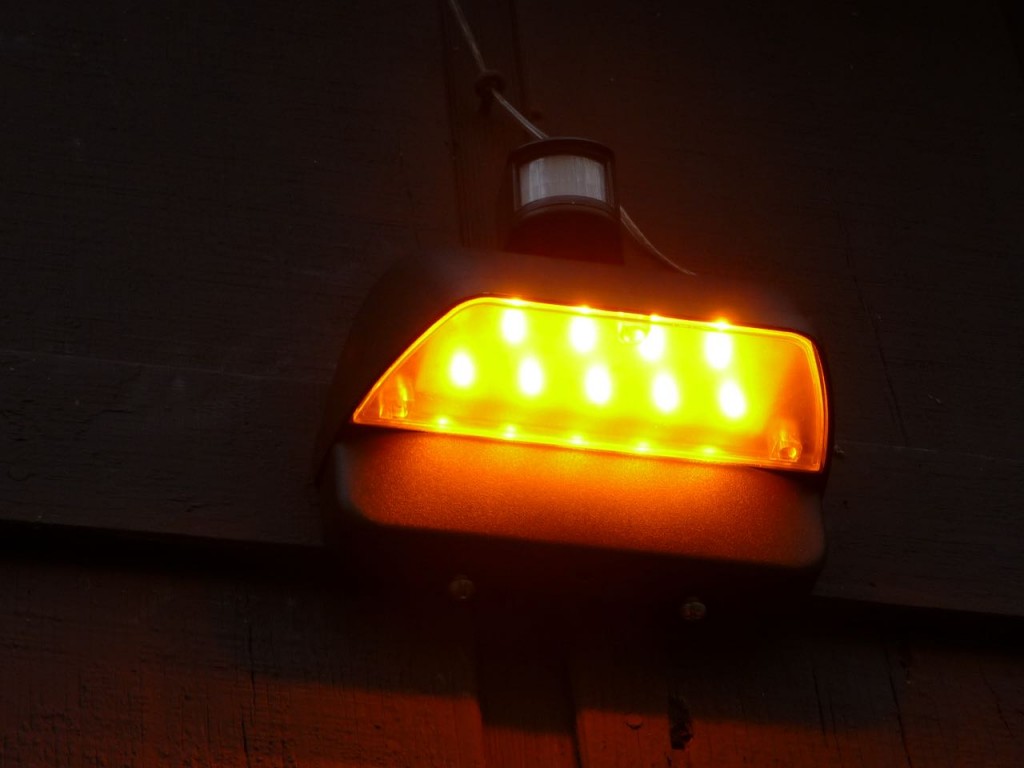 Another amber LED option is called Phosphor-Converted Amber (PCA). Compared to true amber LED, PCA has approximately twice the efficacy at around 75-80 lumens per watt. However, the bandwidth of phosphor-converted amber is much wider. While this provides better visibility and color rendering, it has a greater negative impact on ecology than true amber LED. Yet, the higher efficacy and color rendering may make it a reasonable compromise for lighting large areas, like parking lots. 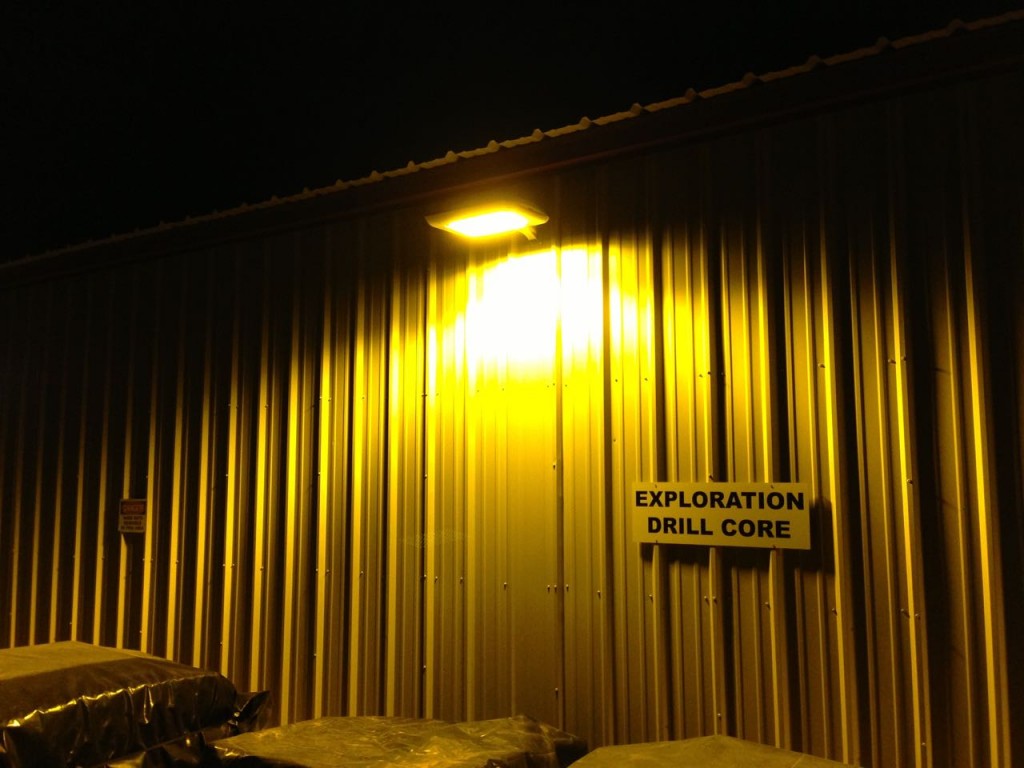 Overall, the best option for amber LED lighting from both an efficacy and visibility standpoint, may be the EXO Optics system from Hubble lighting. EXO is a special lens that fits over a LED. It uses a sharp cut off filter, which eliminates all light energy below 480 nm. But what makes EXO exceptional is it does this with only a 5% loss in efficiency from the native white LED being used, making the EXO optics the very best choice when efficacy is a primary factor. In addition, EXO provides enhanced visibility with a color-rendering index (CRI) of 42. For these reasons, EXO should be considered for a replacement of all streetlights as it provides maximum efficacy, while reducing negative ecological impact. For instance, using an LED fixture with 4000 K CCT and a fixture output of 5,000 lumens, an EXO optics equipped fixture will provide 4750 lumens. In contrast, the reduction of lumen output from a typical 5,000 lumen 4000 K CCT fixture to 3000 K CCT would be approximately 15%, or 4,250 lumens. Furthermore, while 3000 K CCT is more visually comfortable to the eye than 4000 K CCT, it still has approximately 10% blue spectral power density (SPD) below 480 nm. 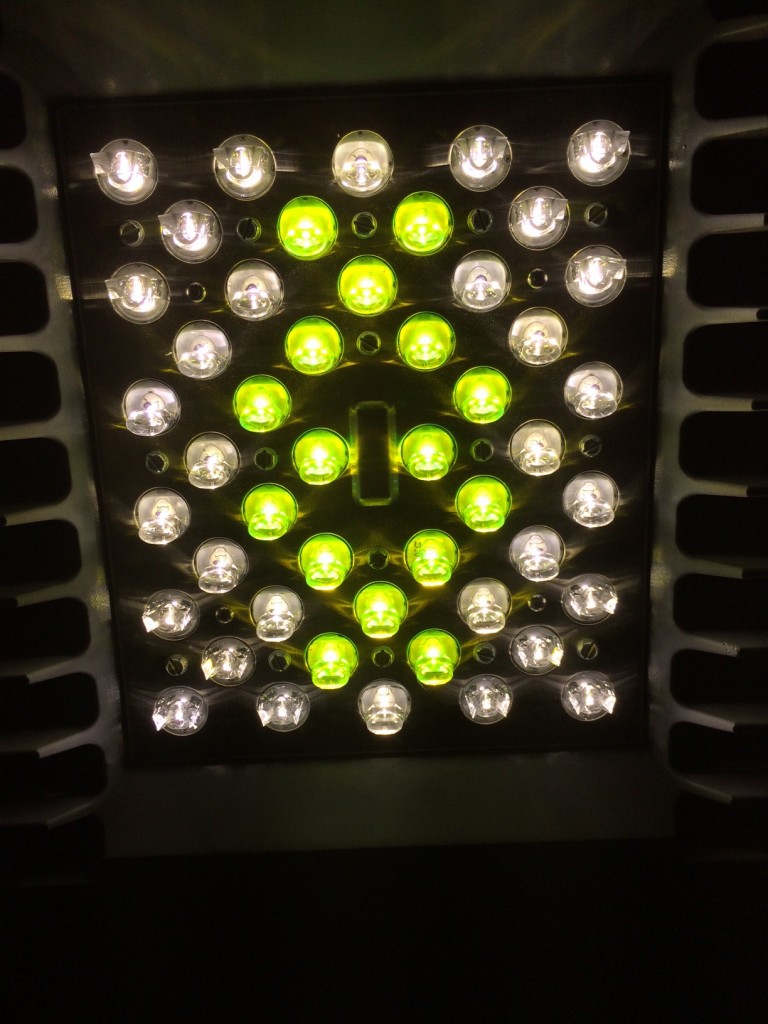 The final ecologically responsible light source option available is to use a warm-white LED when the design criteria require better color rendering than any amber LEDs options can provide. Unfortunately, the use of white light will in most cases produce far greater negative ecological impact than any of the amber choices. The best warm-white LED options that I tested are in the 2,200 K range and available by special order from several manufacturers. The CRI is about 75 and the efficacy is around 75 lumens per watt, making it the least efficient LED choice except for true amber. That said, the visual comfort of ~2,000 K CCT is exceptional and it makes an excellent substitute for incandescent. When visiting Germany, I saw ~2,000 K CCT LED lamps used to replace the mantels in gas lamps and unless you were told of the change you wouldn’t notice the difference. For this reason, if amber color lighting is not acceptable for whatever reason, 2,200 K CCT would be the most reasonable warm-white LED solution available that could still be considered ecologically responsible. With efficacy that exceeds many HPS fixtures in use today, this can still be considered an energy efficient retrofit alternative and the longer life and reduced maintenance still give it a substantial advantage over incandescent or CFL. 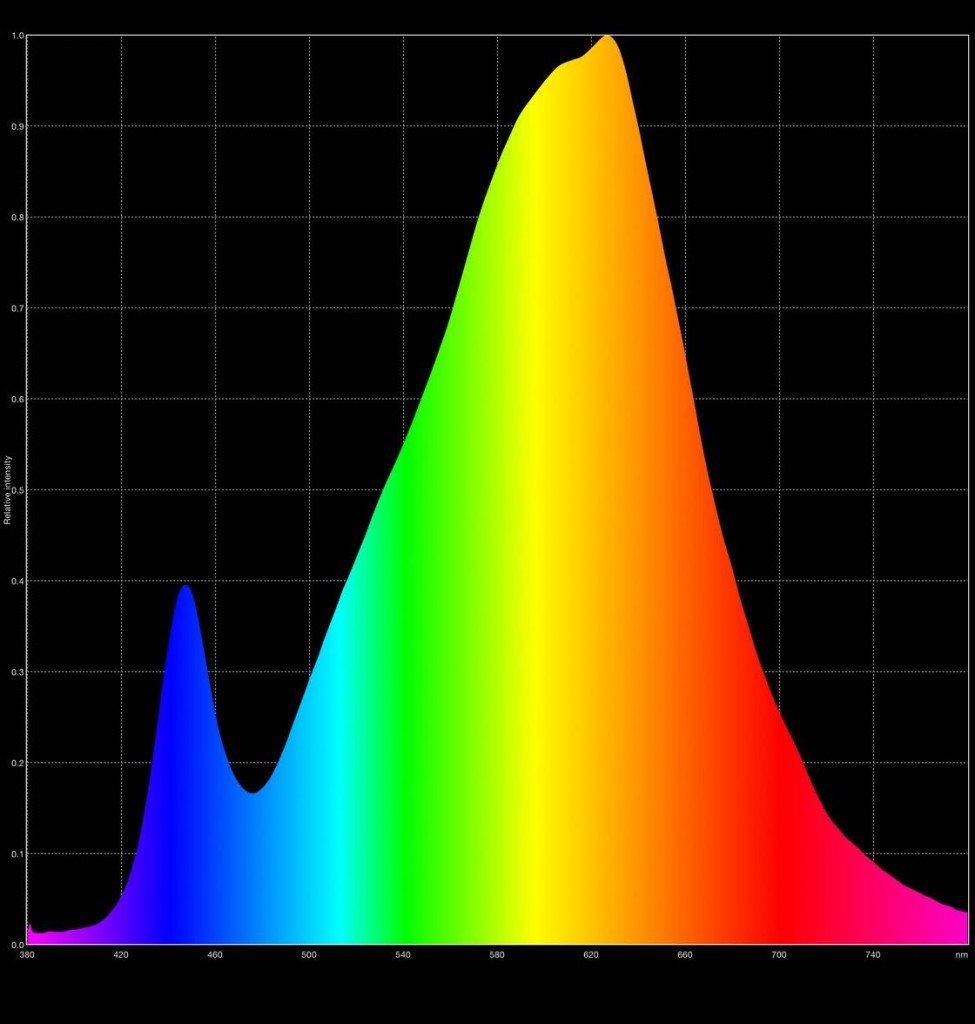 The use of white LEDs over 2,200 K CCT can reduce energy consumption and CO2, but they don’t meet the ecologically responsible criteria of “do the least harm”. For cities that have made a commitment to being ecologically responsible, the use of higher CCT white light LED simply can’t be justified unless it is coupled to a significant reduction in illumination levels. Even so, no more than 2,700 K CCT should ever be considered. With the higher CCT better visual acuity and apparent brightness is achieved. But the apparent glare also increases, so fixtures with exposed LEDs create more glare than the equivalent fixture using any of the other choices mentioned above. Using innovative fixtures that employ frosted lenses or reflectors will help reduce glare, but at the cost of some efficiency.

In summary, while many cities claim a commitment to being “green”, their choices in public lighting often fall woefully short of this goal. Saving some energy and CO2 while deliberately choosing high CCT white light, and not using smart controls to dim to lower lighting levels, shows a blatant disregard for the environment. Lamentably, much of this is due to willful ignorance by the individuals charged with designing public lighting and is exacerbated by lighting manufacturers that market their products as green. Being a little ecologically responsible is an oxymoron. Doing the best job possible with the best technology available is the only path to being truly ecologically responsible.

* One notable exception is that some migratory birds have shown a significant attraction to red lights. This is a serious concern, as most towers are required by FAA law to have red marker lights. In these cases, it is imperative that the lights not stay on continuously but flash regularly instead. This reduces the attraction by the birds and therefore the incidence of collisions.